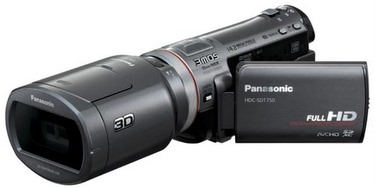 Recording 3D images is now as easy as attaching the 3D conversion lens that comes with the worlds first consumer 3D camcorder, the Panasonic HDC-SDT750K.

Powerful, true-to-life 3D images like those created by Panasonic 3D recording technologies for use in Hollywood movies can now be easily recorded and viewed at home.

Get the full specifications from Panasonic

Even without the 3D conversion lens attached, there are countless ways to enjoy the SDT750K camcorder. This innovative camcorder takes an evolutionary leap forward from the many Panasonic models that have excited users worldwide.

It is equipped with a wide range of sophisticated functions, including the 3MOS System, which features improved noise reduction (NR) technologies, 1080/60p recording, iA (Intelligent Auto) mode in the new HYBRID O.I.S. (Optical Image Stabilization), and a wealth of manual controls.