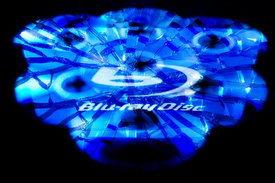 The future of Digital
Home Entertainment is Blu-ray!

Blu-ray Disc, also know as BD, is a High Definition (HD) media format. Its main use is for disc storage of HD Videos, Playstation 3 games, and other data that outperforms standard DVDs.

The discs are the same as standard DVDs and CDs. The name "Blu-ray" comes from the "blue" laser beam that reads the data from the disk instead of the red laser used to read DVDs and CDs.

Blu-ray is the latest technology that offers the ultimate in HD entertainment with these great qualities:

In the 1990s, DVD movies were produced and by the year 2000 they quickly became the major home video format. The problem was storage capacity. With DVDs only able to store 4.7GB of data, a new media was needed to hold HD content.

The Blu-ray Disc format was developed by the Blu-ray Disc Association (BDA), a group of leading consumer electronics, personal computer and media manufacturers, with more than 180 member companies from all over the world including Sony, Samsung, and Sharp.

Blu-ray technology is more expensive to produce than DVDs. As prices come down, more households will be able to afford a Blu-ray player and enjoy HD Digital TV at its best!

One of the most highly publicized disc players is Sony's Playstation 3. Blu-ray got a boost in sales with the PS3. Kids young and old love their video games and watching Blu-ray movies in HD at its best.

If you are looking for a brand new exciting movie experience, then you should consider Blu-ray players and movies.